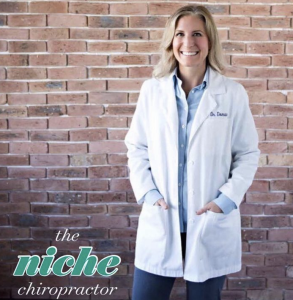 Dr. Sandra Doman is a chiropractor and registered yoga teacher. She has created a new model of eliminating orthopedic pain without drugs and surgery through an integrated approach that uses yoga as a form of therapy to help musculoskeletal injuries.

Prior to becoming a chiropractor, Dr. Doman developed back pain that disabled her from any sports and exercise, including walking her dog.   She saw the best orthopedic, neurological, and physical medicine specialists between Washington DC and New York.

It was not until she combined a regular yoga practice with traditional Western therapies that her back pain finally disappeared and she could resume all normal activities of daily life.  Dr. Doman has since dedicated her life to sharing the gift of yoga in a healthcare setting since 2010 by opening Miami’s first physician-supervised yoga therapy center, Miami Sports Chiropractic & Yoga Center.

She earned her doctorate with honors from Palmer College of Chiropractic, Florida Campus and holds a B.S. in Business and Economics from Lehigh University in Pennsylvania. She developed ‘Dr. Doman’s Guide to Working with Injuries©’, a program to teach yoga teachers how to work with musculoskeletal injuries and serves as the orthopedic injuries educator for all Equinox clubs in South Florida.  She was the on-site chiropractor for the Dwyane Wade, University of Miami, and Shaquille O’Neill basketball camps

Dr. Doman has been on the Board of Directors for the Florida Chiropractic Association since 2017 and was a 3-year President of the Dade County Chiropractic Society.   Miami Sports Chiropractic & Yoga Center is located in Aventura Florida, as well as a satellite facility at Gulfstream Park for the jockeys.  Dr. Doman is adjunct faculty for National University of Health Sciences in Chicago.